Everything you need to know summed up in one tweet exchange: pic.twitter.com/DUVD709tuN

Over the last 4 years the term “fake news” has been used - some say overused - to disparage the mainstream media and its message. Some say it’s just an insult designed to distract from negative but accurate reporting. Others say the term correctly describes how the mainstream media are no longer trying to present news accurately. Instead, they are attempting to shape the narrative by biased and hostile stories. As a hypnotist, I agree with the second group because I know what techniques the media are using and how they work. In fact, I don’t think the statement goes far enough: I would say that ALL news reporting is fake news.

Let’s start with the well-documented bias of mainstream media. 90% of the mainstream media vote and donate to liberal candidates. This is a major issue because humans are highly advanced primates. That means humans are subject to the same largely involuntary responses to threats as any other animal. And there’s no question that the current president threatens the media - he attacks their credibility at every opportunity, points out their mistakes and bias, and insults key figures in their camp. It appears that he would end their messaging hegemony if he could, destroying their livelihoods, careers, and mission. So the media react to these threats the same way other primates do - by defending their territory and attempting to assert their dominance. They simply are not able to prevent those perceived threats from affecting their coverage, in some ways drastically.

So, given that the majority of the media are biased, how does this manifest in their stories? How does this bias warp the news coverage to the point where the label “fake news” is appropriate?

The first major way the media spreads disinformation is by story selection. Certain media outlets simply won’t cover major stories that negatively affect the narrative they promote. The site Ground News does a good job exposing this. It lists each major story along with which side’s media outlets covered it. There are many blind spots in coverage according to the political stance of the outlet. 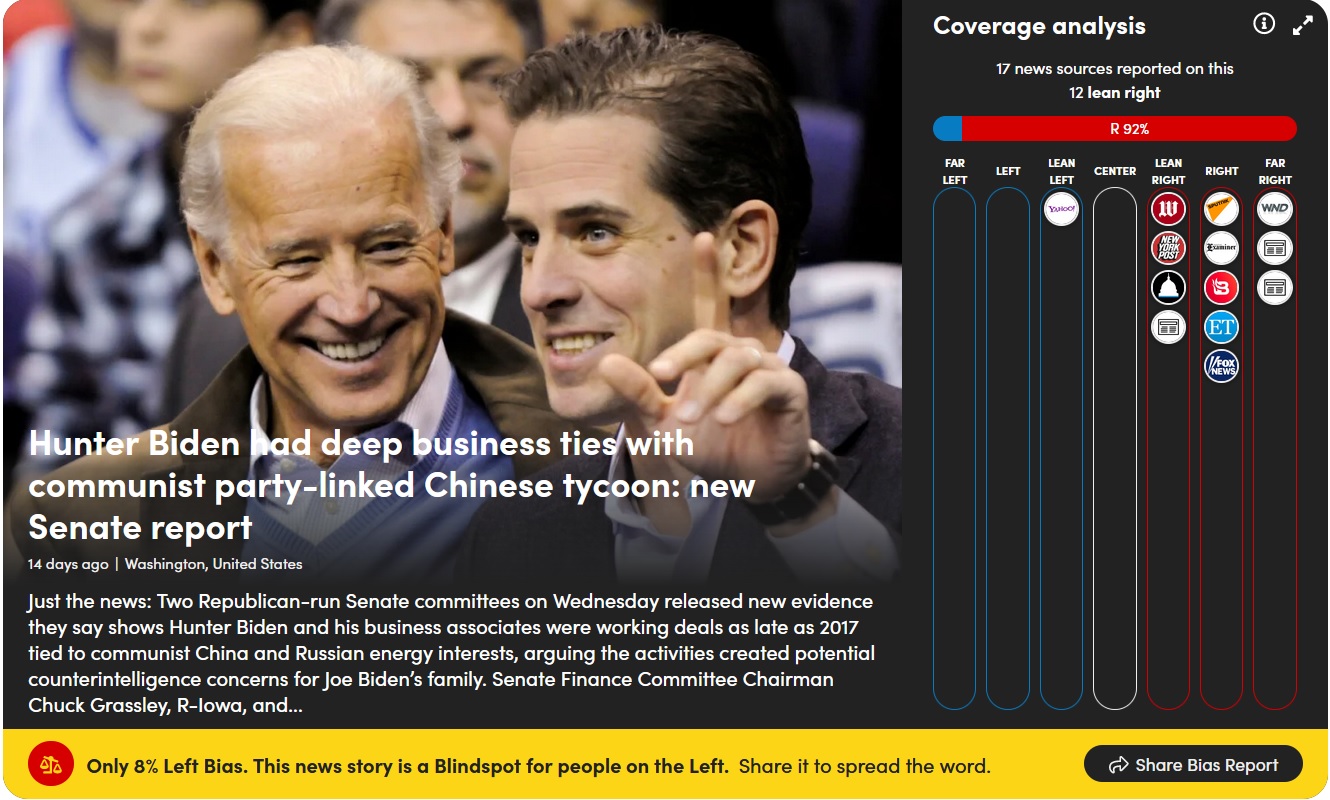 So why don’t people just read outlets from different sides of the spectrum? The news industry has realized that they get more attention, clicks, and revenue by pushing outrage. They promote and frame stories that emphasize how bad the other side is and how threatened their own (good) side is. The more anger or threat that people experience this way, the more they return to the same site later to seek reassurance that the “bad guys” aren’t winning. It is, in effect, an addiction protocol.

The combination of these two methods is even more powerful. CNN has ignored the media stories about how Joe Biden’s son Hunter was given an enormous monthly payment ($83,333 per month) to be on the board of a Ukrainian energy company. He was also photographed smoking crack and falling asleep with a crack pipe in his mouth.

CNN and MSNBC ignored these stories entirely, except to mention in passing that the Republicans were attacking Joe Biden’s family. That means that those viewers stuck in the outrage addiction cycle for those two networks were denied relevant information about the election. Tens of millions of Americans never even knew that the son of a presidential candidate was a crack addict who had been given huge amounts of money by Ukraine for no apparent reason other than his father was Joe Biden.

That’s relevant information for voters, is it not?

So story selection combined with outrage addiction create silos or bubbles in which no external context can penetrate. This is destructive to the unity of the country. It allows for propagandized stories to be perceived as real by those within the bubble. But it’s not the only tool the media has to fake the news.

The second aspect is selective editing to change the context. This can be omission of relevant information, inappropriate comparisons, labeling based on a biased subset of information, or any number of other techniques. The prime example of this is the “fine people hoax,” which Steve Cortes, Joel Pollak, and Scott Adams have all done great work exposing.

Here’s how the hoax was perpetrated. There was a protest march in Charlottesville, VA, that was somewhat ambiguously billed as a “Unite the Right” rally. It was actually a neo-nazi march, although some attendees apparently didn’t realize that until they got there, and didn’t participate in the march once they arrived. A few were there to defend the removal of a statue of Robert E. Lee and the renaming of a park named after him. In a speech after the event, Trump said there were “very fine people on both sides” of the debate on whether or not to remove statues of founders or other historical figures. In other words, he was saying good people can disagree about keeping or removing statues. However, the media claimed Trump was referring to both the neo-nazis and anti-nazi protestors as fine people. The outrage-inducing implication of this was that the president of the United States said Nazis were fine people.

But, of course, that didn’t happen. Because less than a minute later Trump said “And I’m not talking about the neo-nazis and white supremacists, because they should be condemned totally.” So this wasn’t a case where the media were simply misinterpreting an ambiguous statement - it was a case where the media deliberately spread a malicious lie that wasn’t even slightly ambiguous. Once that narrative took hold early on in Trump’s presidency, it became a defining reference point. Millions interpreted genuinely ambiguous events that happened later in light of that fake story. The hoax became a setup for confirmation bias - it became the background context for his entire presidency. And all because of the media’s deliberate spread of falsehood.

- The ludicrous claim that Trump said to inject bleach to stop COVID
Reality: the statement was about injecting light into people’s veins, not bleach

- The claim that Trump is responsible for all 200k+ US COVID deaths
Reality: Every other country had many COVID deaths too, so how many would another leader have had? The original estimate was more than 2,000,000 for the US. Compared to that he is doing a lot better.

- The claim that Trump is a Russian puppet
Reality: A team of Democrat-donating lawyers with the highest levels of funding and access spent two years on it and found nothing actionable

- The claim that Russia hacked the election in 2016 but the 2020 elections were perfectly secure
Reality: If Russia was able to do it in 2016 than others could have done it in 2020

Unfortunately, the use of these techniques has become the norm for media outlets. But once you have read this and understood how the techniques work - story selection, outrage addiction, and context manipulation - you can see them everywhere in the media. You’ll be able to check Ground News or a similar site to see what stories are being swept under the rug. You may begin to assume that context is always being withheld, and look for what is missing before judging a story. And you might even get in the habit of catching the outrage cycle right as it starts, and move things in a more emotionally balanced direction instead. And when you do those going forward, it will help you see through the media’s fake news.

The newsletter will have all kinds of great content delivered weekly.